On the 30th December 2019 I was tagged on a post on Twitter by a concerned member of the public.
They had been out walking past a local clinic to them in West Sussex, and spotted a poster on the wall advertising the book ‘Healing the Symptoms Known As Autism’ by Kerri Rivera.
I looked into it and with the help of Amanda Seigler, contacted the owner of the clinic, a woman named Julia Chaplin.
Julia confirmed she had indeed put up the poster and was most enthusiastic about Kerri Rivera and her chlorine dioxide bleach protocol.
I posed as a mother who has, in quack and ableist speak, a ‘high functioning child with autism’.
I explained that I had tried numerous different treatments and diets on my son and nothing had ‘worked’. I said I was ready to use the CD protocol and asked for Julia’s guidance as a professional.
Julia told me not to listen to media, and sought to wrongly reassure me that CD is not bleach. She agreed to help me, even to mix up the CD when I expressed worry about the correct way to do it.
Julia is a medically qualified registered chiropodist, which makes this so much more concerning as the fact that she also practices from a clinic makes her seem more credible.
Julia asked if I had vaccinated my son, I said yes I had. She then let it be known that she is also anti-vaccine and began talking about the dangers of vaccinating, citing disgraced Andrew Wakefield’s discredited paper withdrawn by the Lancet.
I received emails from Julia which I gave polite replies to; I then passed her details over to The Times who did an excellent undercover investigation.
These emails from Julia also showed contact, support and interest from a well-known quack named Clive de Carle who I previously exposed for offering me GcMAF, a banned blood product here in the UK. Clive also offered me MMS, which is used in the CD protocol.
Clive and Julia then offer to contact Kerri Rivera in the emails.
This shows a worrying trend of these charlatans banding together. If I had been a gullible trusting parent, I could well be abusing my autistic son right now under their guidance with a restrictive diet and bleach enemas.
The correct outcome of this would be for Julia to be struck off as a chiropodist and lose her right to run the clinic.
No reputable medical professional would advise administering Chlorine Dioxide bleach solution made from Sodium Chlorite and Citric Acid to an autistic person as a treatment for autism.
Thank you to Harry Shukman.

Report made to Health and Care Professionals on 24th February 2020:

I am raising a complaint against Julia Chaplin, a Chiropodist registered with you.

On December 19th 2019 I was alerted by a member of the public that Julia has a poster of ‘Healing The Symptoms Known As Autism’ on the wall of her clinic, so I looked into it.

On January 4th 2020 after trying to get hold of her, she finally spoke to me on the phone, I had rung her and posed as a parent wanting advice on treatments for my son.

Julia recommended Chlorine Dioxide Bleach as a treatment to cure ‘my’ autistic son of autism.

The recording is in the link below along with emails she sent me recommending the same ‘protocol’ and links to the author Kerri Rivera who wrote the guide to this bleach protocol book titled ‘Healing The Symptoms Known As Autism’.

The Times also raised a complaint after investigating her after I alerted them, Harry Shukman was the journalist who exposed her here:

I am happy to speak out in court if needed, I campaign against this abuse and have done for the past five years.

This is an unscientifically proven unregulated treatment, it is made from Sodium Chlorite and Citric Acid, mixed together it activates into Chlorine Dioxide Water Purification, Bleach.

Julia recommends it be administered to a child orally and ‘through a funnel up a child’s anus to get to the colon’.

On 8th November 2019 AIM protested the Open Minds Conference, held at Dooley’s Hotel in Waterford, Ireland. Appearing at the event was Clive de Carle, who had been previously exposed in the media for offering AIM’s Emma Dalmayne GcMAF and MMS, two dangerous substances that are sold as ‘cures’ for autism. GcMAF, as well as its stronger version Rerum, are made from blood plasma and are banned in the UK, while MMS, so-called Miracle Mineral Solution, is a chlorine dioxide bleach banned in Ireland.

Despite expressing our concern to Dooley’s, the conference still went ahead. AIM could not stand by and allow this man, who promotes dangerous ‘cures’ for autism, speak without an autistic presence there to show our side.

On 26th January 2020 AIM protested the screening of Vaxxed 2: The People’s Truth, an anti-vaccination film, at the Tabernacle Theatre in London. Fifteen adults stood outside the venue in peaceful protest against the film, which brands autistic people as “vaccine-damaged” and was produced by Andrew Wakefield, who published the original paper falsely claiming a link between the MMR vaccine and autism.

Autistic children around the world are being subjected to invasive and dangerous “treatments” such as chelation due to the scientifically-unproven misinformation put out by these films and those associated with them – and in 2005, a British autistic child died after developing complications from having chelation.

AIM was present at the screening to enlighten and educate those who attended. 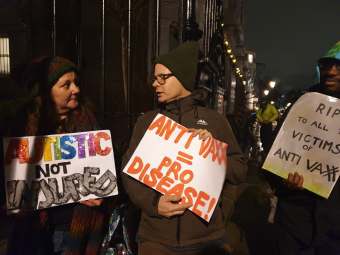 There is no cure for autism. Autism is a neurological difference, not an illness, a vaccine injury, a disease or a curse, and as such we cannot and never will support using untested and unregulated substances on autistic people.